One of the hardest concepts for younger programmers to learn is what returning a value means, a concept which Alice represents by its notion of ‘functions’.  And, in Alice, a great approach is to require students to move an object based on the distance  and to use a function to return the value of that distance and store it in a variable.

Every object in Alice has a set of proximity functions: 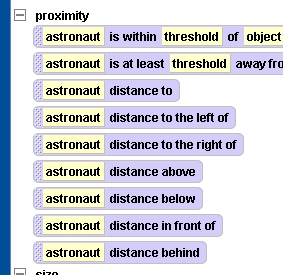 However, distance to, which most students will probably be most tempted to use is rarely what you want to use–especially when you want to move an object relative to another object using the calculated distance.

Instead, use distance above!

In the picture below, if you want the astronaut to move to the spaceship based off of a distance, you should try the distance in front of

Before you jump into text coding with middle school coders  , Alice is a powerful tool for teaching what “returning a value” means.