Assignment 1 )   Miles Per Gallon: Create a world in which the

How to use “what as a string” 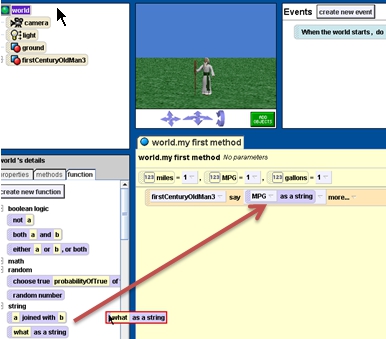 First, watch the animated gifs on this web page that explain how to use math in Alice

reopen the miles per gallon project

Assignment 5) Modification of Fahrenheit to Centigrade

reopen the Fahrenheit to Centigrade project and add

Assignment 6) Circle’s Area and Circumference: Create a world with your choice of person from the Peoplecollection. When you play the world, it should

Here’s a gif showing partial code and what the finished project should look like
Objective : to let the user type in a number between 1 and 10 and then have a character “translate” that into Roman Numerals ( I, II, III, IV, V, VI, VII, VIII, IX, X)

Create an Alice world that